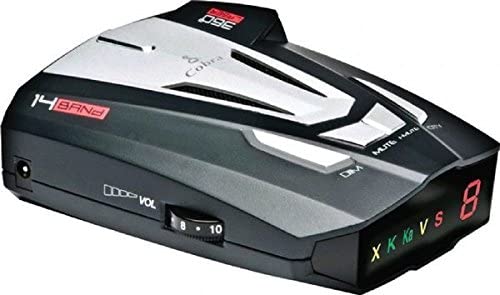 Radar detectors are electronic devices that detect if law enforcement is using a gun to monitor speed. Cobra has long been one of the leaders in the industry because of its durability and value. If you want to find the best Cobra radar detector, you must know what to look for. Our reviews will help you identify the Cobra radar detector that fits your needs.

However, Cobra is known for making high-tech radar detectors with many other benefits. Here are just a few to consider.

It’s obvious why we picked the iRad as the best Cobra radar detector (top pick on the market). It is one of the least expensive models available but doesn’t skimp on features. In fact, it comes equipped with IVT filtering to reduce false alerts. It also comes equipped with anti-falsing technology so you can stay focused on the road ahead. With the voice alerts, you will know what’s going on without looking.

Plus, the iRadar App gives you real-time alerts to law enforcement activity, speed cameras, and red light information from other drivers. If you want a comprehensive display, you will appreciate the bright OLED display complete with brand identification and numeric strength meter. Detect radar and laser with varying levels of sensitivity. Your kit comes complete with the iRad detector, a windshield mounting bracket, and a vehicle power adapter.

If money is no object and you want the latest technology, you can’t go wrong with the XRS9370, which is our runner-up choice. The Cobra XRS 9730 radar detector reviews prove that this model offers super-fast sweep circuitry, so you get the longest range possible. With the Pop model enabled, you can also detect the latest radar gun technology. It reads all bands, including the KU band being used in Europe. When the technology makes its way here, you will be ready.

The VG-2 and Spectre Alert tells you when there is VG2 or Spectre radar detection or surveillance occurring, so you are always protected. Plus, there are City/Highway models that allow you to change the range to reduce false alerts in densely populated regions. In addition, Cobra utilizes the IVT filtering to provide the best user experience. This kit comes with the radar detector, suction-cup mount, and coiled power cord.

Our next Cobra laser radar detector review is for the RAD 350. This model is rated as the best Cobra radar detector under $100. It only proves that you don't need to spend a lot to get access to high-tech equipment. The IVT filter is still included with this Cobra model to reduce false alerts. Plus, you get 360-detection of X, K, and Ka bands, as well as VG-2 and laser signals.

With the audible sensitivity adjustments in either English or Spanish, you can alter the tone strength to reduce distractions on the road. Plus, it includes a seven-segment color display that shows the band identification icons and numeric signal strength for an informed trip. The customer reviews suggest that you don't need to invest more if you just want a basic long-range detector, and we agree. Plus, you are covered by the company's one-year warranty for additional peace of mind.

If you can afford to spend more, you will find this exceptional value for money option. This Cobra radar detector uses an integrated GPS receiver in conjunction with the aura database to provide location-based alerts on well-known speed traps and red-light or speed cameras. This technology provides superior protection over other models and ensures you don’t get a speeding ticket.

The instant-on technology detects radar guns that have super-fast speed monitoring capability. Plus, this model also incorporates the IVT filter to reduce the false alerts you typically receive. This equipment will reduce the alarms you get from automatic door openers, traffic monitoring systems, and other detection devices.

Plus, the Lasereye features ensure that you have coverage from laser signals coming from any side of your vehicle. Choose to use the VoiceAlert and keep your eyes on the road, or watch the stunning OLED display for quick information when you need it the most.

If you want the best smart Cobra model, you can’t go wrong with this 2-in-1 radar detector and dash camera system. It comes equipped with intelligent sensors to monitor road conditions and upcoming threats. With the help of a high-definition dash cam, you can also capture life’s unexpected moments and further protect yourself. The radar detector uses the patented IVT filter to reduce false alerts.

Plus, it offers a full-color LCD screen with a custom speed limit display. The best part is that this unit is WiFi-compatible. You don't need to use cords to set it up. You can also connect through the Cobra app for further information. The 1080p camera is powered with an Ambarella A12 processor and Sony Exmore image sensor, so you know it's built to last. In addition, you get everything you need to get started, including an EX Mag Mount, 16GB SD card, micro USB cable, carrying case, and SmartCord.

Are you looking for the top of the range detector? Cobra doesn’t disappoint with this DualPro model. This Cobra 360 radar detector is the first multi-direction radar system from the brand that contains AutoLearn technology to further eliminate pesky false alerts. The Cobra 360 laser radar detector covers you by providing law enforcement locations and red light camera spots to ensure you remain ticket-free.

This long-range detector also comes with the IVT filtering tech and an OLED display. With the easy-to-read display, you get instant access to the band and threat type, as well as the detection intensity so you can make quick adjustments.

Plus, you will enjoy the early warning offered from this model, which makes it well worth the money. This Cobra DualPro 360° comes complete with an EZ Mag Mount, carrying case, and SmartCord USB connector. You will never have to fall victim to those speed traps again with this expert model guarding your vehicle from every angle.

After looking at the Cobra 9 band 360-degree laser radar detector reviews, you will agree that this is the best rated Cobra model you could pick from. Thankfully, it’s also not that expensive, making it reasonable for an everyday user. This 9-band radar/laser detector comes with an Ultrabright display and compact design. There’s even a digital strength meter that shows proximity to the target.

Change the city/highway selector to adjust the strength and utilize the 360-degree detection to see in every direction. This model even features a Safety Alert, which lets drivers know about road hazards and emergency vehicles to keep you safe on the road.

This affordable radar detector might not have every frill imaginable, but it gets the job done. Your kit also comes complete with a suction-cup mount windshield bracket and coiled power cord for a quick installation. Save money and protect yourself from speeding tickets with this Cobra radar detector.

Comparing Cobra To Other Brands

Modern Cobra detectors have superior technology to some of the other brands. Many of them also work better at sorting out false K-band alarms during your drive.

In fact, some models will mark the locations through GPS where those false positives occur to eliminate them in the future.

This is more advanced technology than Escort, Whistler, and other brands provide. You can even use some of the Cobra models in conjunction with a smartphone app for further functionality.

To install your Cobra radar detector, you must first decide where to mount it. It's best if it is in the center of your vehicle, as low as possible on your front windshield or the dash.

Your Cobra detector should come with all of the instructions and hardware needed to complete the installation. Read through the manual to get the specific instructions for your model. You will also need to plug it in with the Cobra radar detector power cord or hard-wire it to the vehicle.

For more details on where to mount your Cobra detector, watch this YouTube video.

How to Effectively Use Cobra Radar Detectors

Your Cobra radar detector will likely have three bands: X, K, and Ka. The X code detects the older band codes. It is still used, but newer upgrades have made it less popular. The K band is more popular but is also being phased out by Ka technology.

When you receive an alert through the detector, you will want to act quickly to adjust your speed. You can also alter the settings to accommodate your highway or city travel for more accurate warnings.

What are the Cobra detector code meanings?

How much is a Cobra radar detector?

When you are determining which Cobra radar detector is the best, the price might become a top factor. The more expensive options will have more features, you can find a Cobra radar laser detector for less than $100.

Which type of vehicles can I install my Cobra detector?

It’s possible to install the Cobra radar detector in any vehicle, although you might want a compact model for a car that is smaller and doesn’t have as much dash space.

How do I reset my Cobra radar?

If you want to restore the factory settings on your Cobra detector, you must follow the steps in the manual, as each is different. For example, with the XRS 9600 Series, you will hold the Program/Mute button for two seconds. Once you hear three beeps and the PROGRAM appears, you scroll through until you find “Restore Factory Settings.”

Is it legal to use Cobra radar detectors?

Radar detectors are legal on passenger vehicles in every state except Virginia and Washington D.C. You also can’t use radar detectors on military bases.

How do you test a radar detector?

To test your radar detector, you need access to a radar gun. Have a friend park their car somewhere that you can drive past while they use the radar gun. Start at a good distance from the radar gun and see how long it takes before your detector catches the signal. You can adjust the settings on the gun and continue testing until you reach optimal coverage.

How to Keep & Maintain Cobra Radar Detector in Optimal Condition?

To maintain your radar detector, it’s best to keep it out of direct sunlight and from extreme temperatures. If you can’t park your vehicle in a garage, consider using a sunshade. In addition, you want to place it in a location that isn’t easily spotted to avoid theft.

To achieve the best mixture of features and value, you can’t go wrong with the Cobra iRad. Our Cobra iRadar radar detector review shows what customers think of this product and how much it can benefit your daily driving.